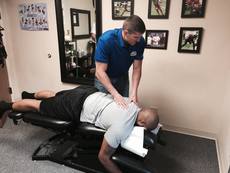 Dr. Galen Stolp grew up in the community of Onida, SD.  He participated in many sports throughout his education at Sully Buttes High School. Whether he found himself playing football, basketball or track in Onida or baseball in nearby Pierre, he was always looking for a new activity to compete in growing up.

Dr. Stolp went on to attend South Dakota State University where he received his Bachelor of Science in Biology in 2007. He always had an interest in the human body and learning how our various systems worked and were interconnected with one another. This curiosity led him to continue his education and pursue a career in the chiropractic field at Palmer College of Chiropractic in Davenport, IA. During his education at Palmer, he was a part of the Palmer Rugby Football Club. Along with learning how to adjust all the joints in the human body, playing rugby gave Dr. Stolp the opportunity to expand his knowledge on treatments and rehabilitation for acute sports injuries as well. Dr. Stolp graduate went on to graduate with cum laude honors (above 3.50) and his Doctorate of Chiropractic Degree in 2011 from Palmer.

Dr. Stolp also had the opportunity to participate in the Palmer Clinic Abroad Program in Fiji in the summer of 2010. Clinic abroad allowed Dr. Stolp to work with many patients over a 7 day clinical period. His patients presented with many diverse and complex cases which provided Dr. Stolp additional knowledge and experience with his diagnosing skills. In addition, Dr. Stolp was given the opportunity to work with many sports injuries and was able to improve his skills with extremity adjusting as many of his patients participated in rugby and soccer, the two most popular sports in Fiji.

Dr. Galen Stolp has been the official Chiropractor of the Sioux Falls Storm for the past seven years 2012-2018, Canaries for the past 4 seasons (2016-current). 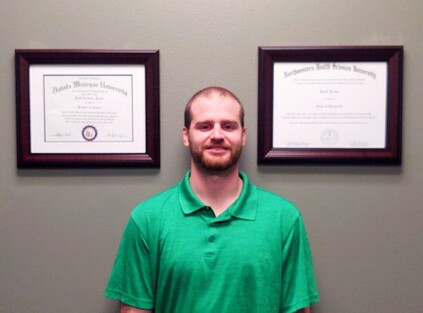 Dr. Jacob Devine grew up in the Sioux Falls area. He graduated from Harrisburg High School in 2012 where he developed a passion for the sport of wrestling. It was this passion that would lead him to Dakota Wesleyan University.

Jacob wrestled for the tigers through the 2016 season while studying Athletic Training for his Bachelor degree. During his time at DWU he spent hundreds of hours working on athletic injuries with multiple athletic teams. After developing an understanding of anatomy and rehab techniques Jacob attended Northwestern Health Sciences University in Minneapolis to receive a Doctorate in Chiropractic. At Northwestern Dr. Jacob developed a love for chiropractic and  skills to help people live a more pain free lives.

Advocare Supplementation-Click above to shop now for all your nutritional needs!